“Chinese are outmaneuvering the U.S. in select countries in Africa,” General Stephen Townsend, commander of AFRICOM, told Associated Press in April. He said the Chinese are “looking for a place where they can rearm and repair warships…”

Deborah Brautigam, director of the China Africa Research Initiative at Johns Hopkins School of Advanced International Studies, disputes this claim. She wrote in the Washington Post that “many of the things our politicians believe about Chinese engagement are not actually true.” She added that China’s economic engagements in Africa are not of a predatory nature, but are “very much in line with the economic interests of these African states, providing jobs to locals and improving public infrastructure.”

Brautigam also debunked myths of Chinese “land grabbing” in Africa, in her book Will Africa Feed China? “Interest in China’s role as an overseas agricultural investor in Africa has generated hundreds of newspaper articles and editorials,” Brautigam wrote. “Sensational statements and robust myths ‒ but surprisingly little investigative reporting.” Her study found that out of over 6 million hectares of alleged Chinese land acquisitions, only 252,901 hectares of land had actually been acquired. The UN’s Food and Agriculture Organization found in a 2021 study that Chinese enterprises working in Africa are making concerted efforts to engage in responsible agriculture.

The sea “road” of China’s Belt and Road initiative extends to east Africa, which has facilitated major infrastructure projects there, such as modern ports and railroads. What the U.S. considers a threat, African leaders consider in a positive light. They see the benefits as economic, not military – in contrast to the U.S.

The U.S. Africa Command maintains military presence in fifty African countries, and has staged coups d’etat at least seven times in the past decade – Libya in 2011, Mali in 2012, 2020 and 2021, Egypt in 2013 and Burkina Faso in 2015. U.S. trade and finance policies and practices in recent decades have amounted to a neo-colonial regime often called a “debt trap” that has left most African countries impoverished. Until the mid-1980s America’s closest African ally was apartheid South Africa. The United States and its European allies, principally Britain, France, Portugal and Belgium, have fiercely resisted or sabotaged African decolonization efforts since the end of World War 2.

Kenya’s President Uhuru Kenyatta said in 2018 that “We are very keen as a country, and I believe also as a continent, to partner strongly with China.” Liberia’s Economy Minister Augustus Flomo said “China is a very, very important partner for our development strategy.” Both leaders were speaking on the occasion of the 2018 Forum on China-Africa Cooperation, attended by nearly all Africa’s leaders.

In May 2021 at the United Nations in New York, China’s Foreign Minister Wang Yi announced, together with African countries and the African Union (AU), the launch of an Initiative on Partnership for Africa’s Development. The emphasis is “to provide greater impetus to Africa’s independent and sustainable development.” It focuses on response to COVID-19 and post-COVID reconstruction, trade and investment, environmental protection, debt relief, agriculture, agro-industry, sustainable development, infrastructure, energy and transport, scientific and technical cooperation, digitalization and industrialization.” It calls for more vaccines for Africa, and to help build African capacity to manufacture vaccines by waivingintellectual property protections for COVID-19 vaccines. As of April 2021, China had donated vaccines to more than 80 countries and exported vaccines to more than 40 countries. As of March 2021, China had shared 48% of domestically-manufactured vaccines with other countries through donations and exports.

The statement said Africa is a stage for international cooperation, not an arena for big-power competition: “this Initiative adheres to multilateralism and is open to all countries and international organizations in the world… under the principle of ‘African ownership, equality and openness’.”

Chinese global foreign aid increased steadily from 2003 to 2015, from US $631 million in 2003 to US $3 billion in 2015. Between 2013 and 2018, 45 percent of China’s foreign aid went to Africa. For the USA, total global “economic and military assistance” was about $50 billion in 2017, of which about $15 billion was military – roughly 30 per-cent – according to USAID’s Foreign Aid Explorer website. Total U.S. economic assistance to the top eleven African recipient countries in 2017 was approximately $7.5 billion; military assistance was about $1.5 billion, according to the same source.

Africa’s debt to U.S. banks and multi-lateral lending institutions – the World Bank and the International Monetary Fund (IMF) – is another story. “Structural Adjustment Programs,” or SAPs, have been the primary mode of the U.S.-Africa financial relationship. These programs forced African countries to pay off debts with increased debt in exchange for austerity and privatization measures. African nations have paid over four times the amount of their original debt to World Bank and IMF lenders since 1980.[1] These debt payments bleed Africa of billions of dollars each year.

China has also set up funds in the World Trade Organization and the World Customs Organization for building trade capacity and helping developing economies, and particularly the least developed countries, to integrate into the multilateral trading system.

China is not looking for war with the United States. And “China has no intention of building a parallel international economic system, competing with the one led by the U.S. China has been a key beneficiary of globalization in the past several decades and has a great stake in continuing that open and integrated international system.” The Belt & Road Initiative – of which much of China’s engagement with Africa is a part – could “not only significantly increase living standards for 64% of the world population… but also become a new segment of the global supply chain, contributing to world economic growth.”

Such a development should be seen as positive, not as a threat.

[1] “Is American ‘Aid’ Assistance or Theft? The Case of Africa,” in American Exceptionalism and American Innocence, by Roberto Sirvent and Danny Haiphong, Skyhorse, New York, 2019.

Mon Aug 9 , 2021
In her role as a senior advisor at the UN Capital Development Fund (UNCDF), which makes public and private finance work for the world’s poorest people, Nandini Harihareswara focuses on ensuring that more women are able to take advantage of digital finance, as a means of lifting them out of […] 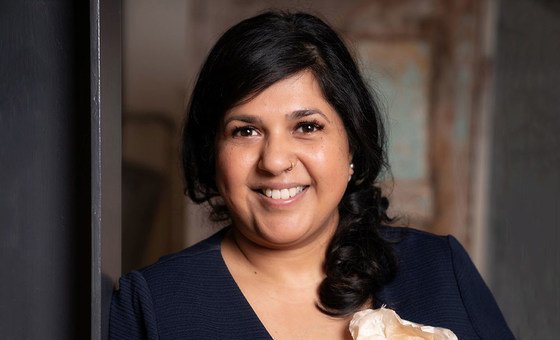