Anyone hoping that the Biden administration would pursue international trade policies to counter the protectionism of the Trump administration should be sorely disappointed. President Biden

Joe BidenBill Maher says Cuomo can’t stay after scandal: He’s no ‘Donald Trump’ Senate confirms Biden’s pick for Navy secretary CNN’s Jim Acosta on delta variant: ‘Why not call it the DeSantis variant?’ MORE has left the Trump tariffs in place, and he shows no signs of wanting to pursue new trade agreements, having allowed his trade promotion authority — the fast-track deal-making ability Congress delegates to a president — to expire on July 1.

On its face, it might sound magnanimous to try and preserve American jobs by requiring government procurement to favor domestic sources. And it might sound good to be economically independent from foreign countries. Yet Biden’s trade agenda can go only so far in benefitting American workers. Ending the trade war with China and opening more markets for American consumers would do much more.

Inflation, which hasn’t been a concern for years, is suddenly back in the news, with consumer prices increasing at unsettling rates in recent months — gasoline prices up 45 percent, new automobiles up 45 percent, apparel up 4.9 percent, natural gas utilities up 15.6 percent, restaurant dining up 4.2 percent — for an overall inflation rate of 5.4% from June 2020 to June 2021.

Meanwhile, other countries across the globe are not hesitating to ignore America and forge new trading partnerships to benefit their economics and emerge from the pandemic on stronger long-term economic footing. Two major trade agreements were forged in the Trump era: The 15-nation Regional Comprehensive Economic Partnership (RCEP), which is probably the largest free-trade agreement in history and includes China, and the 11-nation Comprehensive and Progressive Agreement for Trans-Pacific Partnership (CPTPP). Between the RCEP and CPTPP, there are seven overlapping countries. Neither includes the United States.

All of this is to say, our free trade partnership list is too exclusive. American workers are not benefitting from providing products and services to businesses and consumers in these fast-growing international economies as they should and as has been shown they do where free trade agreements exist. Consequently, China and other economic powerhouses are filling the need while the U.S. government is hamstringing American businesses.

Underscoring this idea, the International Monetary Fund has expressed concern over current American trade policy, writing on July 1, “Trade restrictions and tariff increases should be rolled back, and ‘Buy American’ provisions should be tightly circumscribed and made consistent with the U.S. international obligations. Doing so would underscore the U.S. traditional commitment to an open, stable, and transparent international trade regime.”

Traditionally, American innovators have underpinned an international economy that is open, accessible, and welcoming of new products and services. At the same time, our trading relationships have allowed our influence to transcend mere economics to include American values and human rights.

As the global community becomes more close-knit, it is critical for the Biden administration to re-engage our country in international trade with a long-term vision that benefits American workers and consumers.

Kent Kaiser, Ph.D., is executive director of the Trade Alliance to Promote Prosperity. More information is available at www.promote-trade.org.

US stocks slip as traders weigh mixed data on economy

Mon Aug 9 , 2021
Equities updates Sign up to myFT Daily Digest to be the first to know about Equities news. US stocks slipped on Wednesday after a closely watched jobs report fell short of expectations and a top central banker issued a hawkish forecast. Wall Street’s blue-chip S&P 500 benchmark closed 0.5 per […] 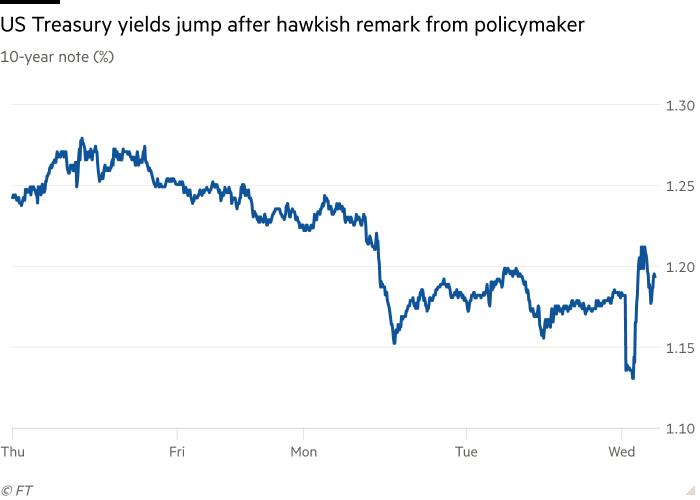